On September 17, 2011, at the 3rd Annual CLASSY Awards in San Diego, the Decibels Foundation was chosen as the "Most Successful Fundraiser by a Group' for their Blanchard School Sixth Grade Roll-a-thon.

The CLASSY Awards, presented by Stay Classy, an on-line fundraising website, are the Oscars for philanthropy. Foundations and charities from around the country submit their entries in dozens of categories and compete for the final prize by garnering enough votes and convincing the panel of judges that theirs is the most worthy project. Decibels’ project, the roll-a-thon, raised $20,000 for the Minute Man Arc Early Intervention program for babies with hearing loss. The fact that a group of sixth graders did this was impressive enough to win over the judges and give them the top prize in their category.

Accepting the award was Bella Dunning, a Blanchard sixth-grader who was one of the roll-a-thon’s leaders. Bella was born profoundly deaf, and is the graduate of a program just like this one.  It’s why her parents, Mark and Julia Dunning, started Decibels: to give other children like Bella the chance to succeed. And succeed she has: she stood on a stage in front of thousands of people and confidently read her speech, no doubt giving hope to other parents of children with hearing loss. Some of who can now get services at Minute Man Arc.​ Click here to see a short video of the award presentation in San Diego.

What did this mean? It meant than the Decibels Foundation received $10,000 to expand the program at Minute Man Arc in Concord from one playgroup for 0-3 to two playgroups. This award allowed Miniute Man Arce to create a separate group for babies from birth to 15 months, allowing then to open up their existing program to the toddlers aged 15 months to 3 years who were on their waiting list.

As they say, a picture is worth a thousand words! The photo below shows the baby group created as a result of this award and the tremendous efforts of 6th grade students at Blanchard School in Boxborough, MA. 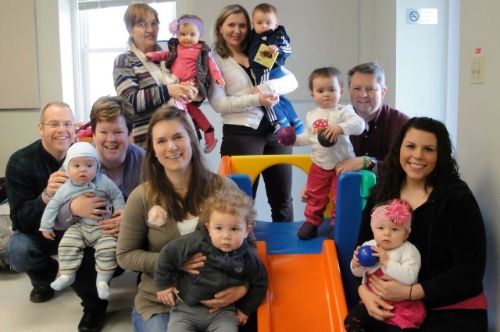